Topics covered on this panel for writers include:

Nicole Maggi was born in the suburbs of upstate New York, and began writing poems about unicorns and rainbows at a very early age.

She detoured into acting, earned a BFA from Emerson College, then moved to NYC where she performed in lots of off-off-off-Broadway Shakespeare.After a decade of schlepping groceries on the subway, she and her husband hightailed it to sunny Los Angeles, where they now reside, surrounded by fruit trees, with their young daughter and two oddball cats.

After a decade of schlepping groceries on the subway, she and her husband hightailed it to sunny Los Angeles, where they now reside, surrounded by fruit trees, with their young daughter and two oddball cats.

Nicole is the author of the thriller The Forgetting (Sourcebooks Fire) and The Twin Willows Trilogy (Medallion Press).

Romina Russell is a New York Times Bestselling YA author based in Los Angeles who originally hails from Buenos Aires, Argentina.Romina’s four-book series, ZODIAC (Penguin Random House), is a SF-Fantasy story set in a galaxy inspired by the astrological signs and is available in ten languages.

As a teen, Romina landed her first writing gig — College She Wrote, a weekly Sunday column for the Miami Herald that was later picked up for national syndication — and she hasn’t stopped writing since.

When Romina’s not working on a YA novel, Romina can be found producing movie trailers or taking photographs. She is a graduate of Harvard College and a Virgo to the core.

Elizabeth Briggs is the New York Times bestselling author of the Future Shock trilogy; the second book, Future Threat, will be released March 1, 2017.

Elizabeth has also written five volumes in her Chasing The Dream series, starting with More than Music, A Rock Star Romance: all fun and sexy standalone romance novels.

She graduated from UCLA with a degree in Sociology, currently mentors teens in writing, and volunteers with a dog rescue group.

Elizabeth lives in Los Angeles with her husband and a pack of fluffy dogs.

You can find her and sign up for her newsletter at ElizabethBriggs.net.

Tobie Easton was born and raised in Los Angeles, California, where she’s grown from a little girl who dreamed about magic to a twenty-something who writes about it.

Tobie’s YA contemporary fantasy EMERGE (Book 1 in the anticipated Mer Chronicles series) offers a peek into a world where mermaids aren’t just real, but live secretly among us.

Moderator: Jennifer Brody
Jennifer Brody’s award-winning novel The 13th Continuum sold to Turner Publishing in a three-book deal and is being packaged into a feature film. The book is a Gold Medal Winner (Young Adult – Sci-Fi/Fantasy) from the Independent Publisher‘s Moonbeam Children’s Book Awards. Return of the Continuums and The United Continuums (July 11, 2017) complete this epic trilogy.

Jennifer is a graduate of Harvard University, a creative writing instructor at the Writing Pad, and a volunteer mentor for the Young Storytellers Foundation. She founded and runs BookPod, a social media group for authors, and she lives and writes in LA. She has been accepted for a residency at the Helen R. Whiteley Center, run by the University of Washington.

Jennifer began her career in Hollywood. Highlights include working for Michael Bay’s Platinum Dunes and New Line Cinema, most notably on The Lord of the Rings films and The Golden Compass. In 2008, she produced the film Make It Happen for The Weinstein Company.

You can find more info about all of these endeavors on her website: JenniferBrody.com 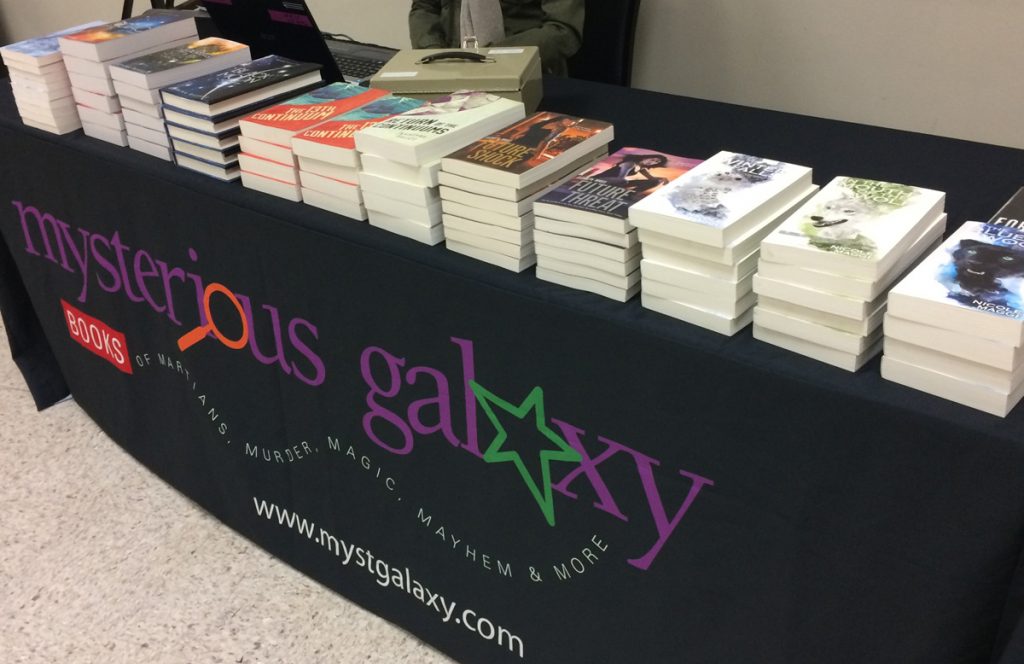 Attendees were able to purchase the panelist’s books.