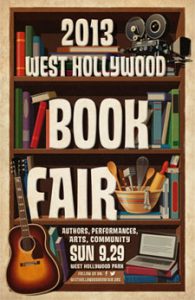 As always, IWOSC hosted a booth at the West Hollywood Book Fair.

More than 300 novelists, journalists, poets and other writers appeared on panels and read on stages such as:

Free
Open to the public
Visit WHBF.org to check out the programs in detail.