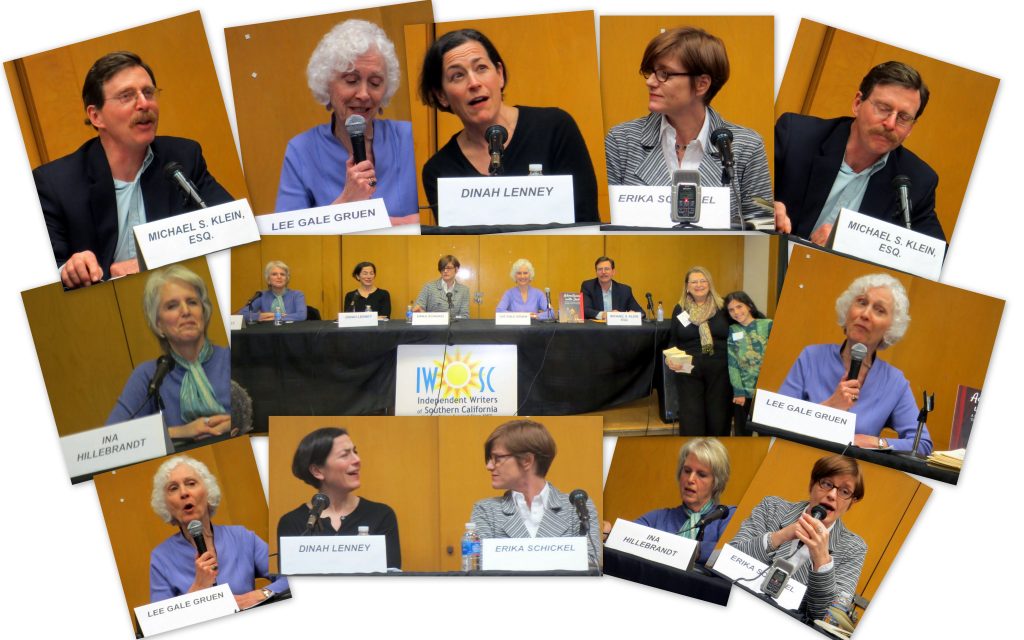 Writing a memoir? Contemplating tackling the form? Our panel of memoir writers and teachers, plus our legal specialist in things literary, will cover memoir writing do’s and don’t’s, and getting the book of your life story out there.

Topics to be covered include:

ERIKA SCHICKEL is the author of “You’re Not the Boss of Me: Adventures of a Modern Mom.” Her essays can be found in several anthologies and the LA Observed column, “I On LA.” She teaches, writes book reviews and ad copy for a number of outlets, and is currently at work on a full-length memoir.
Her website is ErikaSchickel.com.

DINAH LENNEY wrote “Bigger than Life: A Murder, a Memoir,” published in Tobias Wolff’s “American Lives” Series at the University of Nebraska Press, and co-authored “Acting for Young Actors.” A longtime actor herself, she’s appeared on stage, in movies, and in countless episodes of primetime television. Her prose has been published in many journals and anthologies – The New York Times, Los Angeles Times, Los Angeles Review of Books, Agni, Creative Nonfiction, Kenyon Review Online, and Ploughshares among them – and she received special mention in the Pushcart Anthology 2010 for an essay in the Water~Stone Review. A graduate of Yale and the Neighborhood Playhouse, Dinah serves as core faculty in the Master of Professional Writing Program at USC, in the Rainier Writing Workshop at Pacific Lutheran University, and in the Bennington Writing Seminars, where she earned her MFA in creative nonfiction.
Her website is dinahlenney.com.

MICHAEL S. KLEIN, ESQ., has a broad range of transactional experience in the areas of entertainment law and business transactions. In addition to his legal work, Mr. Klein is the long-term chair of the First Amendment Committee of the ACLU of Southern California. In that capacity and as an individual, he has also spoken frequently on civil liberties issues. He has been a frequent radio and television commentator on CNN and on programs such as “Saving the American Dream.” Mr. Klein is also a frequent speaker on legal topics. He has spoken for CEB, the Los Angeles County Bar Association, Beverly Hills Bar Association, the State Bar of California, and law schools at UCLA, USC, Pepperdine, Loyola, Southwestern, and others. Klein is also the founding counsel for IWOSC. He has helped numerous IWOSC members since IWOSC’s inception with free initial telephone conversations and reduced rates for IWOSC members. Publications are available on request. Mr. Klein attained his with B. A. from Indiana University, graduating Summa Cum Laude, Phi Beta Kappa. He obtained his J.D. from Yale Law School, and did graduate studies in Economics at Yale University. He is a partner at the law offices of Klein & Weisz, in West Los Angeles.

LEE GALE GRUEN‘s memoir, “Adventures with Dad: A Father and Daughter’s Journey Through a Senior Acting Class,” will be published on May 15, 2013. Prior to taking this turn in her life, Lee Gale had a 37-year career as a probation officer. After retiring, she and her 85-year-old father started attending an acting class for seniors at Emeritus College in Santa Monica, just for fun. Ms. Gruen wrote the scenes they performed together for three years in the class showcases, bonding more than at any time in their lives. She went on to become a working actress, appearing in television, short films, commercials and community theater. She regularly performs at her alma mater, UCLA, for the UCLA Medical School, portraying patients for student training, and was also one of six supporting exercise/dancers in a 2011 Jane Fonda exercise DVD. Her transition to becoming an actress as a senior has been written about in Time Magazine and the Los Angeles Times. She is currently working on her next book of memoirs, told in short story form, and continues to be an active advocate for senior community programs.
Her websites are leegalegruen.com and adventureswithdadthebook.com.

Moderator:
INA HILLEBRANDT a writer, speaker, writing coach, and editor/publisher specializing in memoir. She also works with fiction, to help both new and published authors create books of their life stories, or flights of fancy. Her work includes taking the written word onstage, and she is involved in developing film and TV projects, her own and students’. Ina’s experience includes 20+ years as a creative and communications consultant for Fortune 500 companies, and 10+ years writing/coaching corporate clients and individuals. She co-created an intergenerational program at UCLA, has been a featured guest on TV, radio and the Web, and has been quoted in The New York Times, Omni, Bottom Line, National Association of Female Executives Journal, and other media online and in print. She’s written articles for Public Relations Journal, TIAA/CREF and others, and was writer-editor of the City of L.A. Dept. of Recreation and Parks News. Her next book, the Toolbox Edition of “How To Write Your Memoirs…Fun Prompts to Make Writing…and Reading Your Life Stories a Pleasure!” is due summer 2013. Her first book, “Pawprints,” became an Amazon.com best seller and led to the Pawprints Literacy Plus™ program. A companion curriculum guide for educators, “Pawprints – The Student Prints,” was revised and reissued December 2012. Books Ina has helped others develop and publish include the “Stories From The Heart” series, “Wine, Women, Whispers” by Alon Mintz, “Of Politics, Ladies and Bagels,” by Gene Zahn, and other books of memoir, romance, and poetry.
Her websites are InaTheMemoirCoach.com and InasPawprints.com.