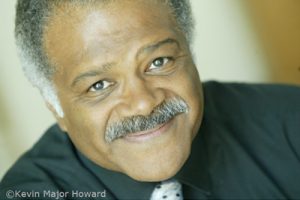 Ted Lange personifies the Renaissance Man Award he received from the NAACP. A graduate of London’s Royal Academy of Dramatic Arts, Lange gained worldwide recognition as a gifted actor of stage and screen, revered director, and prolific writer.

Join us as he is our guest for an interview and Q&A about his career as an actor, screenwriter, director and playwright.

Lange has penned twenty-four produced plays, including his historical trilogy, “George Washington’s Boy,” “The Journals of Osborne P. Anderson” – opening May 15 at Theatre/Theater in Los Angeles, and “Lady Patriot,” as well as “Four Queens, No Trump,” a comedy which played to rave reviews and won NAACP Best Play.

He has directed the Shakespearean plays “Othello,” “Richard III” and “Hamlet.” He wrote “Born a Unicorn,” a musical about black Shakespearean actor Ira Aldridge. “Behind the Mask,” Lange’s one-man show on the life of Paul Laurence Dunbar, tours nationwide.

Lange’s ability to infuse modern traits into his historical characters makes history accessible and relevant to the viewers. His plays bring audiences to their feet as they are not only entertained but also educated in a black historical viewpoint. Akin to August Wilson’s repertoire, many of Lange’s plays have garnered prestigious awards and have been performed nationwide.

Based on historical fact, “The Journals of Osborne P. Anderson,” the second in Lange’s historical trilogy, illuminates one of history’s untold stories: John Brown’s raid. Nineteen men stormed Harper’s Ferry in 1858 and all were killed or captured except for one: Osborne P. Anderson. Lange directs a large ensemble cast.

Ted Lange garnered worldwide fame for his portrayal of Isaac on “The Love Boat.” He has directed a vast number of TV comedies as well as the feature film “For Love of Amy.” The Oakland native has written well over a dozen film scripts, as well as seven “Love Boat” scripts for Aaron Spelling Productions.