Discussion
Actress-Author Adrienne Barbeau in Conversation: From Broadway to Bookseller with ‘Maude’ in Between 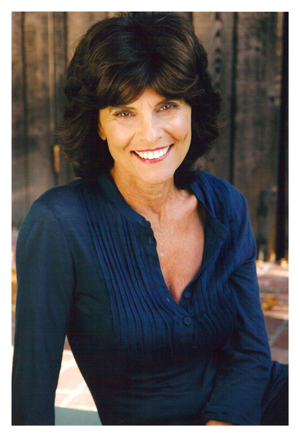 “All my life I’ve been a performer – an actress, a singer, a dancer, even a talk show host – but never in the wildest dreams of my first 50 years did I ever imagine I would write something that other people would read. I still can’t quite get over it.”

So writes ADRIENNE BARBEAU on her website, ABarbeau.com. Best known as Bea Arthur’s daughter, Carol, in Norman Lear’s TV series “Maude,” starring in the John Carpenter films “The Fog” and “Escape from New York,” Wes Craven’s “Swamp Thing,” and her creation of Rizzo in the original Broadway production of “Grease,” she has created a versatile career encompassing diverse facets of entertainment and has found success and acclaim as the author of three books.

She has become a best-selling author, a recording artist, and the star of numerous features, films for television, concert performances, musicals and plays. She’s even been a radio show book reviewer and narrates audio books.

Adrienne Barbeau’s books are: the best-selling memoir “There Are Worse Things I Could Do,” the comedic thriller “Vampyres of Hollywood,” and its comedy romance sequel, “Love Bites.”

Join us for a lively and unforgettable evening with this multi-talented actress and author.

Ms. Barbeau will be interviewed by TELLY DAVIDSON, author of the acclaimed media tie-in book “TV’s Grooviest Variety Shows,” cited as a Book of the Year by the Emmy Academy, and the forthcoming agented nonfiction book, “What Didn’t You Like About It?,” on the pop culture and politics of the 1990s. He has been a columnist on TV, feature films, and music for over a dozen commercial publications and websites including FrumForum, AllAboutJazz, FilmStew, Yahoo Movies, the LA Daily News, Entertainment Today, and has worked on the TV specials “Pioneers of Television,” “Most Outrageous Game Show Moments,” and as associate producer for KCET’s “The WRITE Environment.” Currently Telly works with veteran film producers’ services rep Jeff Porter at Porter Pictures in acquisitions and research, and on their new online streaming digital network, True Indie TV. Telly is a proud and active member of IWOSC and PEN, having hosted or produced several IWOSC panels.

Adrienne began her career in 1963 with the San Jose Civic Light Opera. After graduating high school, she traveled with a musical comedy revue, entertaining our servicemen on Army bases throughout Southeast Asia. In 1965, she moved to New York where she made her Broadway debut as Tevye’s second daughter, Hodel, in Fiddler on the Roof. A Tony nomination and a Theatre World Award for her creation of Rizzo in the original Broadway production ofGrease led her back to California and the role of Bea Arthur’s daughter, Carol, in the hit seriesMaude.

Since then she has become a best selling author, a recording artist, and the star of numerous features, films for television, concert performances, musicals and plays.

Movie fans know her best for her performances in The Fog, Escape From New York, Creepshow, Swamp Thing, Back to School, and Cannonball Run. Her recent films include the Academy Award winning ARGO, and the soon to be released Divine Access, In Extremis,Malevolence 3, and The Second Chance Sanctuary.

Adrienne has a Golden Globe nomination and over 450 screen performances to her credit. She starred as Ruthie, the Snake Dancer, on HBO’s fascinating series, Carnivale. She was Oswald’s mom on Drew Carey, Victoria Grayson’s mom on Revenge, and Suzanne Stanwyck on General Hospital. Her recent appearances include Criminal Minds, Sons of Anarchy, and the Hallmark film The Memory Book.

Having appeared in over 25 musicals and plays throughout the country, in 2006 she returned to New York and standing ovations for her performance in the Off-Broadway premiere of The Property Known as Garland. Summer of 2012 found her returning to her favorite musicalFiddler on the Roof, playing Golde this time, not Hodel.

Off camera, Adrienne is the voice of Catwoman in Batman, The Animated Series, Ms. Simone in Scooby-Do on Zombie Island, and Scooter’s Mom in the 3-D animated film Fly Me To The Moon. She can be heard in a myriad of video games: God of War and Halo 4 among them.

Adrienne is the author of three books: the best-selling memoir There Are Worse Things I Could Do; the comedic thriller Vampyres of Hollywood and its comedy romance sequel, Love Bites. She is currently at work on the third in the series.