There was a poet from Los Angeles
Whose limericks never would scangeles.
When asked just why so
He replied, “I really don’t know –
“Maybe it’s because I always try to cram as many syllables into the last line as I possibly cangeles.”

Yes, it’s hard, and we don’t always know how to make it both truthful and commercial. Like many
genres, if we make it true, it will find its own commerciality.

Our panel of established and credentialed poets will discuss the poetic form as they use it, their
marketing ideas, and the aesthetic and public opportunities for poets.

Impressive energy is employed as a poem is created, and a similar level of energy and creativity is required to really get the poem seen and marketed.

Our panelists have been through it all, and have won many of the battles in a field that has been described as a minefield.

We will not include poetry readings during the discussion but the evening will be quite lively and entertaining, and perhaps a bit controversial.

Join us for what should be a very spirited, amusing, and stimulating discussion.

CHARLES WEBB Reading the Water, Liver, Tulip Farms & Leper Colonies, Hot Popsicles, Amplified Dog, Shadow Ball: New and Selected Poems, and his most recent, What Things Are Made Of, published by the University of Pittsburgh Press in 2013. Webb’s awards in poetry include the Morse Prize, the Kate Tufts Discovery Award, the Felix Pollock Prize, and the Benjamin Saltman Prize. His poems have appeared in many distinguished journals and anthologies, including American Poetry Review, Paris Review, Iowa Review, Ploughshares, Kenyon Review, Tin House, Poets of the New Century, Best American Poetry, and The Pushcart Prize. A former professional rock musician and psychotherapist, he is the editor of Stand Up Poetry: An Expanded Anthology, and recipient of a Whiting Writer’s Award, a fellowship from the Guggenheim foundation, and the CSULB Distinguished Faculty Teaching Award. He is Professor of English at California State University, Long Beach, and teaches in the MFA Program in Creative Writing there.

Finding the wisdom, magic, and communicative spark in your writing, Lisa is a freelance editor for the last 12 years and conducts creative writing workshops. She is a Professional Member of PEN and IWOSC and has recently completed a novel. You can learn more about her at BarringtonEditorial.com or Facebook.com/lisa.m.mora.5 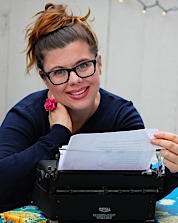 KELLY GRACE THOMAS Kelly Grace Thomas’s life has been a love affair of all things literary since the beginning. This self-proclaimed word ninja keeps busy as a poet, novelist, screenwriter, adventurer and educator.

She has been published in Aaduna, Aries, Apeiron, Black Heart, and other literary publications. She was recently nominated for a 2015 Pushcart Prize in poetry. For a sampling of her work and more information please visit KellyGraceThomas.com.

MARY-ALICE DANIEL was born in Nigeria and raised in England and Nashville, but considers Los Angeles her home. After attending Yale University, she received an MFA from the University of Michigan. In the fall of 2014, she will begin the PhD Program in Literature and Creative Writing at the University of Southern California as an Annenberg Fellow.

She is currently working on her first full-length poetry collection. Her work has appeared or is forthcoming in New England Review, Mid-American Review, PANK, New Orleans Review, and other journals.

MIKE SONKSEN, also known as Mike the Poet, is a 3rd-generation LA native acclaimed for poetry performances, published articles and kinetic city tours. Poet, journalist, historian, tour guide and teacher, he graduated from the University of California Los Angeles and is currently finishing an advanced degree at California State University Los Angeles. Sonksen has lectured at and had his book — “I Am Alive in Los Angeles!” — added to the curriculum of over 60 universities and high schools

Moderator
SUZANNE LUMMIS teaches several classes through the UCLA Extension Writers’ Program, including those she designed, “The Complete Poet: Vulnerability, Sexuality, Sense of Humor,” “Writing the Persona Poem” and “Poetry Goes to the Movies: The Poem Noir.”

Her poems have appeared in the noted literary journals Ploughshares, The Antioch Review, The New Ohio Review, Hotel Amerika, and The Hudson Review, and in the Knopf “Everyman’s Poetry Library” anthologies, Poems of the American West, and Poems of Murder and Mayhem. She has work forthcoming in an important new West Coast literary magazine, Miramar. She’s the literary curator for Lummis Day: the Festival of Northeast Los Angeles, named for her grandfather. Her website is: SuzanneLummis.com