Online Panel:
How to Write Funny 2020 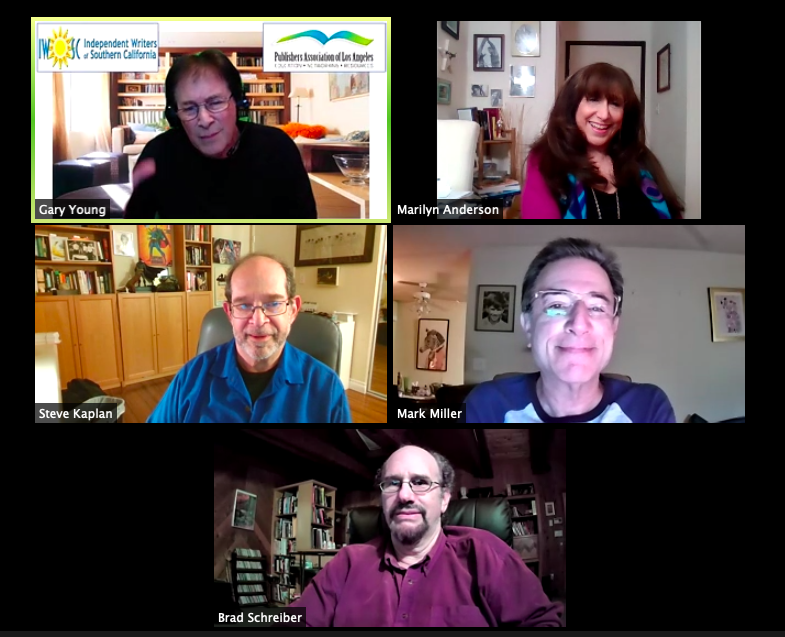 “Dying is easy; comedy is difficult,” especially these days.

But we persist because we can. From the farces of Feydeau, Baudelaire, and Wilde, on to George Carlin, Lenny Bruce, Larry Gelbart, Terry Southern, Paddy Chayefsky, and Norman Lear, right on through to Dave Chappelle, Mindy Kaling, and Stephen Colbert today, blistering social satire and, yes, even a few organic laughs are necessary for our sanity.

As the late great Chuck Barris used to joke, “all this and less” (actually much more!) will be covered by our stellar panel of luminary laugh-makers and wisecracking writers!

Brad Schreiber has written for all media and has been producer, executive, director, consultant and actor.

In comedy, he is the author of the fiction and nonfiction how-to What Are you Laughing at?  (Allworth) and the best-selling Guinness Book parody Weird Wonders and Bizarre Blunders (Simon and Schuster).

His compendium of amusing live theatre disasters is Stop the Show!  (DaCapo). Becoming Jimi Hendrix (DaCapo) was selected for the Rock and Roll Hall of Fame Library.

For years, Steve Kaplan has been one of the industry’s most respected and sought-after experts on comedy.

His first book, The Hidden Tools of Comedy is a best-seller in its field, and his new book, The Comic Hero’s Journey: Serious Story Structure for Fabulously Funny Films was recently published.

In addition to having taught at UCLA, NYU, Yale and other universities, Steve Kaplan created the HBO Workspace, the HBO New Writers Program and was co-founder and Artistic Director of Manhattan Punch Line Theatre.

In addition to development projects for HBO, he has taught workshops at companies such as DreamWorks, Disney Animation, Aardman Animation, NBC’s Writers on the Verge, and others.

Steve conducts private coaching and one-on-one consultations, and has taught his Comedy Intensive workshops to thousands of students around the world, including — in pre-pandemic times — Los Angeles, New York, Australia and Mumbai. He’s presently teaching online on Zoom. You can find out all about it at KaplanComedy.com.

Mark Miller has held positions as a nationally syndicated humor columnist for the Los Angeles Times, an interviewer and humor blogger for The Huffington Post (along with a wealth of other publications), a TV sitcom staff writer/producer, a movie scriptwriter, a stand-up comic in nightclubs and on TV, and a writer for comedians such as Jay Leno, Dana Carvey, Roseanne Barr, Rodney Dangerfield, and Jim Carrey.

Follow his website/blog at: MarkMillerhumorist.com.
Reach him at: mark.writer @ gmail.com.

She is writer-producer of the 2015 family comedy feature, How to Beat a Bully, and she co-wrote a TV Movie, Making Mr. Right, for Lifetime. Her romantic comedy feature, Cold Feet,is set for production in 2021. On TV she wrote for Murphy Brown, FAME, Sherman Oaks, and Friday the 13th – the Series, and she was on the writing staff of Carol & Company, starring Carol Burnett.

The Writers Guild of America honored Marilyn as a writer of one of the 101 Best Written TV Series of the Past Seven Decades, and she won a LUMINAS Award for the Positive Depiction of Women in Film & TV.

In the publishing world, Marilyn is author of the personal finance book, How to Live Like a MILLIONAIRE When You’re a Million Short, and the humorous relationship book, “Never Kiss a Frog: A Girl’s Guide to Creatures from the Dating Swamp,” published in 10 countries.

With her dog Boomer, she co-wrote MUTTweiler: An AutoDOGography. She is also the co-author of a mystery-thriller, Dishonor Thy Father, just published in August 2020. Marilyn also works as a script consultant, and for 15 years she was a judge for the most important screenwriting contest in the world.

Gary Young’s plays, mostly dealing with social issues, have been produced and performed at the Kennedy Center, Lincoln Center, the White House, the Smithsonian, and venues throughout the US and Europe.

His play, Interruptions – A life, a death, pizza, dancing and Murphy’s Law, premiered at the Kennedy Center, and enjoyed a very successful West Coast premiere in Los Angeles, June through September, 2000 at the Stella Adler Theatre in Hollywood. His one-person show, On Hold: the Myth of Male Maturity, had its world premiere in England.

The second edition of Loss and Found, a self-help book for young widows and widowers co-authored by his wife, Kathy, will be published in 2021. He is trying hard to finish his novel, Glimmer, which combines the supernatural and quantum physics for dummies.